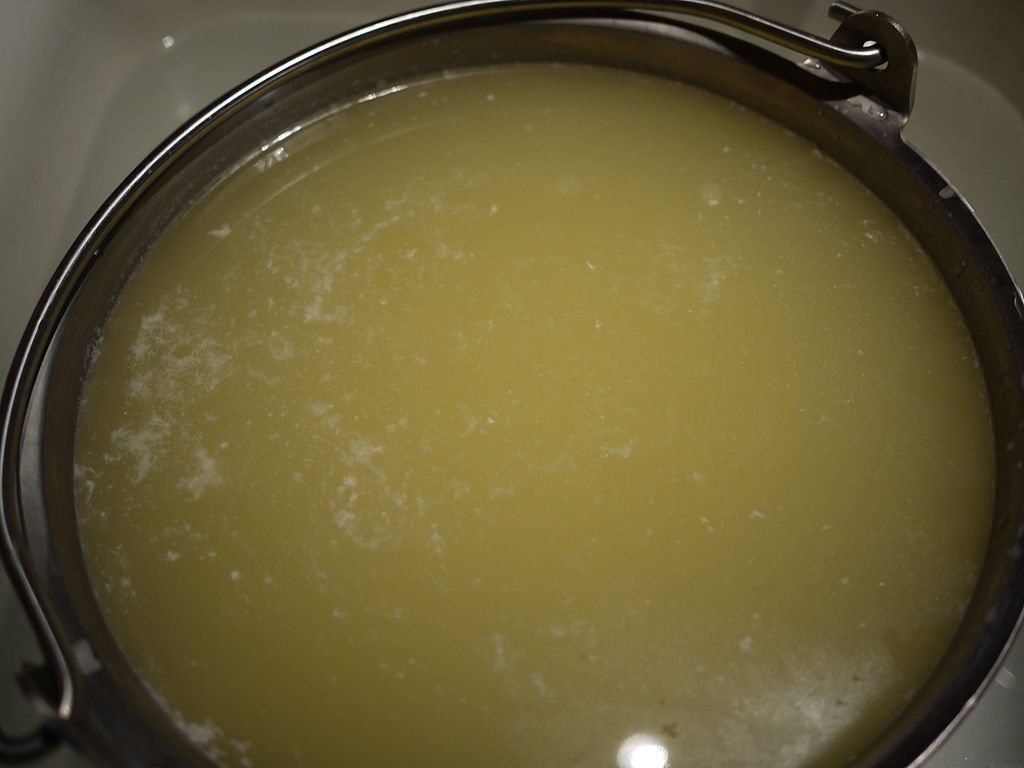 The many properties of sheep milk serum

The fact that sheep milk serum has many benefits for our body has been by now scientifically proven: it has the ability to detox and cleanse, it helps staying fit, since it is also rich in nutrients, it can be easily digested and it helps with intestine’s health. In order to measure its nutritional value, we just have to take into consideration that milk serum proteins have higher nutritional values than meat and vegetable proteins. Although cow milk protein values and sheep milks are basically similar, serum proteins can be found in higher doses in sheep milk.

These proteins, which can be found in numerous milk and dairy products, in many energy bars and powdered protein shakes – are labelled “concentrate of milk serum proteins” or “hydrolyzed serum proteins”, and they help enhancing the velocity with which muscles can grow, therefore aiding the skeleton supporting body weight. An amino acid produced by several proteins, leucine, helps with the synthesis of muscle proteins, and can also enhance glucose tolerance and reduce inflammation of tissues caused by obesity.

What are serum proteins?

The main protein–based substances that can be found in serum are the following:

The presence of serum proteins in the milk varies according to the type of animal, lactation period and several other factors.

It seems that milk serum proteins are able to support the immune system and therefore kill cancer cells. How is that possible? Milk serum can provide many benefits to cancer patients, thanks to the wide spectrum of substances protecting healthy cells and acting on cancer cells. Among the others, there is one that can be reasonably be defined as a “cancer killer”: the aforementioned lactoferrin. How does this process take place? Lactoferrin activates immune system cells such as neutrophilia, macrophages and T cells, that is the first line of defense against cancer cells. Lactoferrin is drawn by the highly negative charge that can be found in the membrane of cancer cells. This is not the case with healthy cells since they have a neutral charge.

After being attracted by cancer cells, lactoferrin binds to them and triggers a process that ends up killing them; not only that but it also blocks angiogenesis – which is the growth of blood vessels that feed cancer cells. Another feature of lactoferrin helping in the fight against cancer is its ability to bind with iron – a bond that is 100 times stronger than transferrin’s, the major transportation protein of iron within the human body. This property is of utmost importance if we take into account that several studies suggest that an excessive amount of iron may increase the risk of developing some types of cancer, those types that need iron in order to reproduce and grow.

Lactoferrin also fosters the production of glutathione, classified as phase II enzyme, a powerful substance supporting cancer prevention, and apparently, an increase in this substance may be able to prevent the development of prostate cancer. A clinical trial on cancer patients showed a regression of the disease, starting from the moment patients were injected with serum proteins with a concentration of 30 g/day. These enzymes are multipurpose substances useful to increase life quality on a cellular level. A researcher from John Hopkins University, Paul Talalay, stated that an increase in phase II enzymes proved to be a very effective way to protect oneself from carcinogenesis – that is, the development of new tumours. According to the researcher, a milk serum supplement must be regarded as an effective way to prevent and take cancer apart.

In Sweden, some researchers from the University of Lund explained how alpha-lactoalbumin proteins that can be found in milk serum have the ability to kill every known type of breast cancer cells – even in low dosage. Alpha-lactoalbumin is configured as a protein capable of selectively inducing apoptosis, which is the programmed suicide of cancer cells. Multiple researches to this regard are carried out in the United States too: the United States for Biotechnology Information, of the National Institutes of Health, stated that including milk serum proteins in a diet might help significantly in decreasing insurgence and growth of chemically-induced tumors in lab rats.

However, milk serum proteins are not just able to prevent, but might also have the ability to slow down cancer growth: it has been showed that a branched chain of amino acids (BCAA) leucine, isoleucine and valine and other compounds that can be found in milk serum proteins can create a limiting and restrictive calorie response, since it seems that limiting calories might help increasing treatment results in cancer patients. Experiments on lab rats fed with a low-calorie diet showed a much slower tumour growth with this diet in contrast with lab rats that followed a regular diet. In conclusion, the vast majority of cancer patients might benefit a lot from consuming super foods which are specifically rich in nutrients and generally lower in calorie content.

Anti-mycotic properties of enriched sheep milk serum thanks to safranal

A study conducted by the University of Castilla-La Mancha and Murcia University evaluated distribution of safranal (and organic compound, aromatic aldehyde that can be found in nature and in form of glycoside (picrocrocin) in saffron, cheese, milk serum and requesón (a serum-based dairy product)) and the anti-mycotic potential of fractions of milk serum against Penicillium verrucosum fungus. In order to do that, researchers have produced cheeses using raw sheep milk and adding 40 mg of safranal/kg and they have been tested against a control milk (with no added safranal). Safranal turned out to be more concentrated in requesón compared to milk serum and requesón serum. These liquid fractions showed positive antimycotic properties and they have inhibited moulds with a safranal concentration of around 35 µg / kg, while studies showed that in order to obtain a similar inhibition for a standard safranal solution, a solution of 80 mg/kg must be employed. These results show that milk serum has a synergetic effect with safranal in preventing mold–induced deterioration.

We have already talked about hydrolyzed serum proteins in the paragraph where we mentioned the information that can be found on the ingredient label. But what are they? Whey Protein Hydrolysate (WPH) derive from hydrolysis, an artificial process of enzyme digestion in which the bonds between proteins are divided and they are transformed into smaller molecules, mainly into oligopeptides which are then digested and absorbed faster. It would not be correct to define this product purely as a “protein” since it is by definition formed by chains which are composed by more than 100 amino acids. It is, therefore, more correct to define them as “hydrolyzed peptides of milk serum” or “peptides of milk serum”. WPH are actually not entirely composed by hydrolyzed proteins: they can include an average of 20% and up to 50% of branched amino acids, decomposed by hydrolysis. Taste can be a good indicator of product quality since a higher content of hydrolyzed proteins tends to give the powder a more bitter taste; this characteristic makes them less popular than other serum proteins. But there is an upside: this treatment might be able to reduce digestive tolerance problems, such as bloating, absorption issues and tympanites. That is why hydrolyzed protein compounds are added to some specific diets as a medical solution for treating patients with digestive problems. Highly–hydrolyzed forms might very well be the least allergy–inducing ones among the various types of milk serum, and they naturally allow for an absolutely faster assimilation among all the proteins.